We know that hunger is not just a matter of food but a matter of policy. Public policies impact where our food comes from, the kinds of food we eat, how we acquire food – and what our options are when we don’t have enough. In this new kind of post for the ELCA World Hunger blog, John Johnson, director of domestic policy for the ELCA, joins Ryan Cumming, program director for hunger education with ELCA World Hunger, for a conversation about hunger and policy, including important public policies that could impact people experiencing hunger and poverty in the United States. Links to both the audio and the video are below.

Subscribe to the ELCA World Hunger blog, and sign up to join the ELCA’s network of advocates.

(If you are one of our regular subscribers to the ELCA World Hunger blog and reading this via email, the audio and video files may not show up. Just click on the title of the post to head over to the main blog webpage to listen in.)

“I was so moved,” said Elena Robles of a talk she heard about stress and farmers near the end of her term as a Hunger Fellow with the ELCA Advocacy office. Farm Bill conferees are engaged in the task of bridging differences between the Senate’s (S.034) Agriculture Improvement Act and the House of Representative’s (HR.2) Agriculture and Nutrition Act, aiming for Farm Bill consideration before upcoming midterm elections. The speaker Robles heard, Matt Perdue, shares his insights here with us about very human elements the Farm Bill addresses.

There is a lot that weighs on a farmer’s mind. Farming is a tough occupation. Unpredictable weather, staggering financial risk, volatile markets, and the strain of heavy workloads are all routine aspects of a life in farming. Spend a few minutes in a small town coffee shop, and you quickly realize that the struggles of farming often dominate those conversations. Farmers are comfortable talking about their stressors. What they rarely acknowledge is their actual stress.

The reality is that mental health struggles among the farming population is a persistent and growing problem. Farmers and agricultural workers have a much higher rate of suicide than the general population. This is exacerbated by the fact that 60 percent of rural residents live in areas that suffer from mental health professional shortages. When farmers do acknowledge their stress, they often find that there’s nowhere to turn for help. 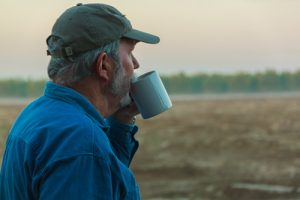 Farmers are under greater stress today than anything most have experienced since the 1980s. Net farm income has declined for five years and is now less than half of what it was in 2013. As trade uncertainty compounds already low commodity prices, experts suggest that a rebound could be years away. While the economic challenges aren’t necessarily the same as those of the 1980s, many worry that a similar farm suicide crisis is brewing.

Many are optimistic that a new Farm Bill will, at the very least, bring farmers and ranchers a desperately needed measure of certainty. Among the legislation’s hundreds of pages is the farm safety net, which supports farmers when market forces make it all but impossible to turn a profit. It includes credit programs that can keep a farmer afloat between the costs of planting and the revenues of harvest. The Farm Bill also includes programs covering conservation, trade promotion, rural development, renewable energy, and everything in between.

As Congress makes progress toward passing a new Farm Bill, a bipartisan group of legislators has worked diligently to address the agricultural community’s growing need for mental health services. Led by Congressmen Tom Emmer and Tom O’Halleran, and Senators Tammy Baldwin and Joni Ernst, the coalition has resurrected a long-forgotten and never-funded program: the Farm and Ranch Stress Assistance Network.

FRSAN was established in the 2008 Farm Bill to provide grants to extension services and nonprofit organizations that offer stress assistance programs to farmers, ranchers and farmworkers. The program would fund farm hotlines and websites, community outreach and education, support groups, and home delivery of assistance. In short, FRSAN helps communities better support farmers when they need it most.

The Senate and House have each passed their versions of the Farm Bill, and each includes reauthorization of FRSAN. As they hurriedly work to reach agreement and pass a final product, it’s important that a strong and diverse coalition of groups continues to advocate for the inclusion of the Farm and Ranch Stress Assistance Network. It’s important that members of Congress hear from farmers, health providers and the faith-based community about the need to better support our agricultural community.

Beyond the Farm Bill and far from the politics of Washington, it’s equally important that we continue the conversation around farmer mental health. We need to educate members of our communities to better recognize and respond to the signs of distress. We must also identify those mental health resources and services available in rural areas and leverage those to better serve our agricultural population. Most importantly, we need to make sure that when the stress mounts, farmers have somewhere to turn.